How can 400GbE Leverage 100GbE Technology to Lower Cost/bit?

Last week at the IEEE 802.3 Plenary meeting in Orlando, FL, the IEEE 802.3 400 Gb/s Ethernet (400GbE) Study Group was started with unanimous support!  John D’Ambrosia, Dell (also Chair of the Ethernet Alliance), led the Call-For-Interest (CFI) to start the study group.  The 400GbE Study Group should meet for the first time in Victoria, British Columbia in May and the standard should be completed by 2016.

The IEEE 802.3  400GbE Study Group will define the objectives for the future 400GbE project, and will likely choose from copper, multimode and single-mode fiber implementations.  Ultimately, these objectives will need to be technically feasible and cost effective, while at the same time having broad market potential.   It is thought by many that 400 GbE will be able to re-use existing technology, similarly  to how 40GbE and 100GbE re-used 10GbE technology.

For example, 400GbE could be defined in such a way that that is uses 100GbE modules to build 400GbE links.  Consider that the industry has already invested millions of dollars in 100GBASE-LR4, which could be  leveraged in defining a single-mode 400GbE specification.  This would allow 400GbE to ride the cost reduction curves of 100GbE technology.

The deployment and interaction between 10GbE and 40GbE in data centers is highlighting some interesting possibilities.  For example, just last week the Ethernet Alliance hosted a panel presentation at OFC on “The Need for Speed – Beyond 100GbE”.   In his presentation, “Stepping Stones to Terabit-Class Ethernet”,  Dr. Jeffery J. Maki, Juniper Networks, suggested a similar concept, where 100GBASE-LR4 specifications  provided the basis for the future 400GbE specification.   The illustration below shows how such a strategy would enable four 100GbE modules to interact as a single 400GbE module. 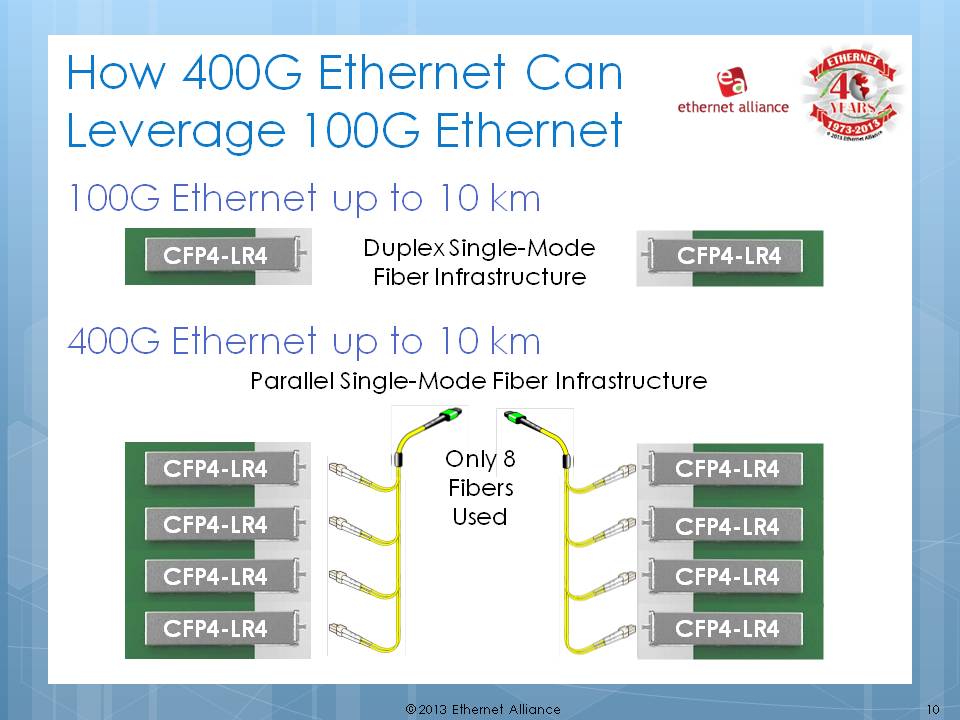 End users have used parallel multimode fiber (MMF) for years with InfiniBand, inter-chassis links, 40GBASE-SR4, 100GBASE-SR10 and soon 100GBASE-SR4.  This concept could be with single mode fiber as well.  The end-user could run 4 sets of duplex single-mode fiber instead of ribbon fibers as shown.  This concept could reduce the initial deployment of 400GbE by using the existing single mode fibers already deployed and potentially even re-using existing 100GbE modules.  Such a strategy could lower the initial investment in the 400GbE physical layer, which would be a good idea for the industry to consider.

With this technique of using multiple 100GbE modules, a switch or blade could also break out the 400GbE port into 4 100GbE ports.  This breakout would enable high density 100GbE ports in a similar manner to how 40G QSFP+ modules are broken out into 4 10GbE ports today.

The work on 400GbE is just getting started, and ideas such as this and others, will most likely be presented, discussed, and considered.  It will be the role of the IEEE 802.3 400 GbE Study Group to hear these presentations, as it works towards defining the 400GbE project.  Such efforts always drive the need for consensus within the industry, and this is where the Ethernet Alliance will help the industry progress!

President of the Ethernet Alliance

The views and opinions expressed in this blog are solely that of the individual(s) and should not be considered the views or positions of the Ethernet Alliance.