As the industry voice of Ethernet, the Ethernet Alliance serves as a collaborative melting pot for member companies from 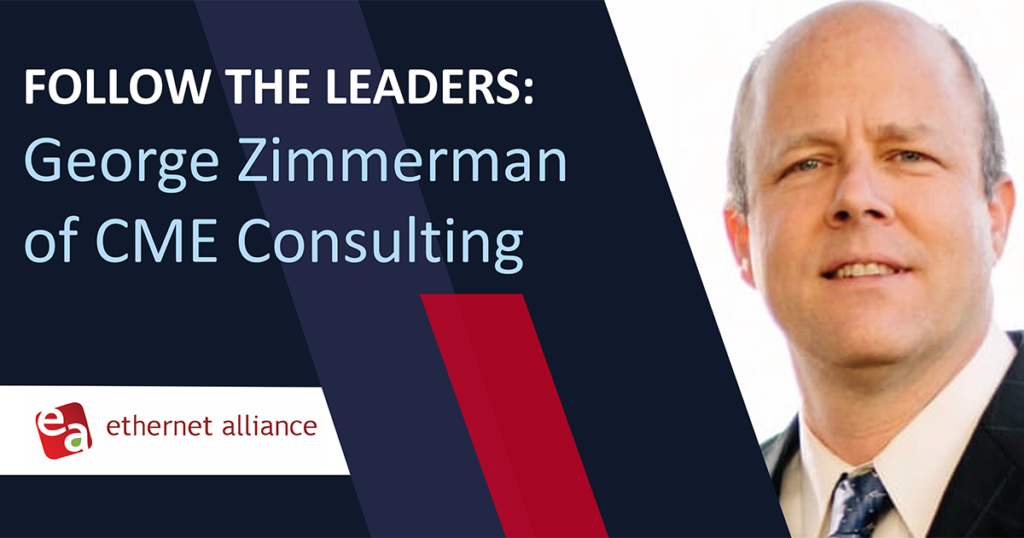 across the Ethernet ecosystem. Dedicated to advancing Ethernet and related technologies, members work together in support of critical activities, such as bringing Ethernet standards to the marketplace, incubating new technologies, and facilitating interoperability testing.

Fostering an Environment of Collaboration for the Ethernet Ecosystem

Ethernet Alliance Technical Committee Chair, George Zimmerman of CME Consulting, recently shared insights into his role in the organization and the ecosystem at large. Beyond his technical leadership, he is a widely recognized expert in Single-Pair Ethernet and related technologies.

Q | Tell us a little about yourself and your company?

Oddly enough, I came to engineering via the space program but these days, my work is very down-to-earth. My life took a detour when I went to work in the Communications Systems Research section at NASA JPL, as I fell in love with communications theory, signal processing, and FEC.

In the 90s, I ventured out into the industry to pursue broadband communications, where I worked on some of the first DSL Ethernet bridges. That was my introduction to standards, but it wasn’t until I founded Solarflare Communications that I found IEEE 802.3. Shortly thereafter, I became involved in founding the Ethernet Alliance.

After more than 20 years in wireline networking standards – including more than a decade in Ethernet – and serial entrepreneurships, the opportunity to use my expertise to build ecosystems and develop new wireline technologies and standards for communications presented itself. Thus, CME Consulting was born, and it has been an exciting journey since.

Through both Solarflare and CME Consulting, I’ve been in leadership roles for every BASE-T Ethernet PHY since 1000BASE-T, including NBASE-T, automotive Ethernet, and Single-Pair Ethernet (SPE). It became clear early on how critical providing power was to the industry, so I’ve been deeply involved with the development of Power over Ethernet (PoE) and Single-Pair PoE (SPoE), and their interactions with National Fire Protection Association (NFPA) codes.

Q | What do you hope to achieve during your tenure as the Ethernet Alliance Technical Committee Chair?

That’s a good question, because I believe the main job of the Technical Committee Chair is to get out of the way of the technical subcommittees themselves, while still serving as a leader, supporter, and resource. Ethernet is diverse, with a cornucopia of spaces that are all at different points along the development process.

PoE’s needs are somewhat mature, served by certification programs and efforts to ensure that the technology isn’t hamstrung by misconceptions or regulatory obstacles. However, SPE’s needs have been very different in the beginning of the technology rollout. At the moment for SPE, educating the market and roadmapping the technology may be more important. High-speed networking is somewhere in the middle – firmly established, but still rapidly evolving. So you see, high-speed networking advanced through plugfests, demonstrations, and education on new standards.

Ethernet Alliance members in each of these areas and subcommittees work discretely, therefore, it’s my job to foster an environment where individual subcommittee communities can set, manage, and fulfill their own goals.

Q | As a recognized SPE expert, how and where does SPE fit into the Ethernet landscape and the Ethernet Alliance’s 2022 Ethernet Roadmap?

While it’s nice to be recognized, I’m always skeptical of those who call themselves experts…but that doesn’t keep me from having lots of opinions. I believe there is still a lot of confusion out there about SPE. Like any nascent technology, there are a myriad of directions it can go in.

This isn’t the first time I’ve been working on single pair technology that carries Ethernet. Speaking from experience, I can tell you that Ethernet, especially simple Ethernet like SPE, ends up everywhere. What makes SPE different is that it is being optimized for industrial, intra-machine links – automobiles, trains, and so forth – and building and facility automation. The trades and practices in these Operational Technology (OT) environments are distinctly different from the Information Technology space that Ethernet has lived in for the past 40 years.

During those four decades, Ethernet connected computers…until somewhere along the way, computers ended up inside almost everything, and in many cases, became invisible. Some of those applications look like and are managed like IT, and naturally fit the IT model. Others though, such as fire alarms, access control, HVAC, lighting, small sensors, actuators, and even doorbells don’t fit that model well. I mean, who really thinks of their doorbell as a computer? When it comes down to it, an awful lot of them have networked microcontrollers. If you have a Ring™ doorbell and a Ring Chime™, then you have a network, possibly even using PoE, involved in making that ‘ding-dong’ sound.

Ethernet stakeholders always ask, “Why don’t we just use BASE-T for this?” The answer is that 4-pair BASE-T is significantly different from both what it’s displacing and what the installers are used to. Often, these OT technologies are installed with single pairs in an unrefined way, by skilled tradesmen who aren’t familiar with IT. SPE alleviates this issue, because it fits neatly into their practices and model.

I learned a long time ago that the best approach is to create something that installs and operates like the technology it’s replacing, but that also does the job better. SPE does exactly that – it is faster and provides better integration with the overall network. It brings the proven security and familiarity of Ethernet networking to OT, which has been developing a whole new set of protocols to enter the information age.

SPE is opening up greenfield territory for Ethernet in OT. Ethernet’s roadmap used to focus on speeds and media. Looking at the past several years, it has shifted to applications – where Ethernet gets used, and how it can be adapted to fit the use models of those applications. By opening up OT, SPE means a whole new world with billions of links.

Q | How important is SPE to automation, OT networks, and Industrial Internet of Things (IIoT) applications?

It’s not an exaggeration to say that it’s hugely important. Automation, OT networks, and IIoT are generally fixed in position. They need power, they need security, and SPE delivers. It’s designed to fit into the practices already in use in these networks. I had an early mentor in business who taught me a simple formula for technology success – give people something that does a better job by going further, faster, or being cheaper – but that they already know how to use. SPE does that in OT.

Q | Where do you see SPE heading in the next several years?

Short answer – everywhere. SPE is just breaking out, but we’re already seeing Ethernet as an essential component in the automotive space. Cars don’t have to be self-driving to benefit from Ethernet. Differentiation has migrated SPE from infotainment like the 360° parking view displays, to advanced driver assistance systems (ADAS), to basic control systems operating at 10 Mb/s.

The auto industry benefits by leveraging skills from a vast technology ecosystem that’s busy developing secure, reliable, flexible, and time-sensitive networking with Ethernet. Industrial automation is set to do the same. Already, networks with more sensors and data needs greater than 10 Mb/s backhaul can support are in the works. I’m currently chairing a new SPE project aimed at meeting these demands with a 500m 100 Mb/s PHY. It’s the right technology at the right time.

Q|  Tell us an interesting fact about yourself?

I’m not sure that I’m all that interesting. At one time, I was Vice President of a national humor society but unfortunately, I’m just not that funny anymore.