OFC 2014 was buzzing with many new releases of 100GbE optics and 400GbE demonstrations.  The 100GbE modules have definitely proliferated with demonstrations of CFP, CXP, CFP2, CFP4 and QSFP28 form factors.  The new types of 100GbE optical interfaces discussed included PSM4, C-BAND, CWDM and IEEE standardized SR10, SR4 and LR4.  Several vendors had 400GbE modules on display and Finisar and TE Connectivity showed working CDFP modules.  The proliferation of 100GbE is upon us, and the 400GbE physical layer is right around the corner.

Hot topics from OFC will be discussed in the inaugural session of Analysts’s Hour that I will be hosting on Wednesday, March 26th at 10am Pacific with Dale Murray of LightCounting.  I saw Dale all over the floor of OFC and he’s going to give you the scoop on what he saw if you ask some questions.  Dale is also going to talk about the next generation of Ethernet that is after the 10Gb/s family which includes 10GbE, 40GbE (4X10Gb/s) and 100GbE (10X10Gb/s).  This webinar is only for Ethernet Alliance members and they can sign up for the webinar here. Furthermore, the webinar will be archived on the Ethernet Alliance members-only website.

In the recent past, I’ve blogged about the IEEE 802.3bm work to standardize a 500 meter 100GbE PMD.  As posted comments in the notes portion of the blog, I stated that none of the contenders could reach the 75% required to be accepted as an IEEE standard.  Instead of an IEEE standard, three of the candidates for the 500 meter reach have formed or are forming Multi-Sourcing Agreements (MSAs).  With these new MSAs, AOCs and emerging form factors, we’ll have a plethora of 100GbE options for single-mode fiber (SMF).  Here is a run-down of options for 100GbE over single-mode fiber:

If competition leads to lower costs, then 100GbE SMF should be dropping soon.

My best-of-show goes to TE Connectivity for showing a 28.8 Tb/s blade with a fiber shuffler and the new MXC connector.  The blade has 48 300Gb/s (12X25Gb/s) modules to yield 28.8 Tb/s of throughput – that’s fast!  Some people double count this bandwidth to say that it is 57.6 Tb/s of directional throughput since each module is bi-directional.  Not only did TE demonstrate the fast modules, but they showed a fiber shuffle technology with laminated sheets that shuffled over 1,000 fibers.  To top it off, they used the new MXC connector that has several advantages over the MTP connector including LC-like extraction, 16X interfaces, dust tolerance and low cost.  Expect to see more solutions based on this type of technology next year at OFC. 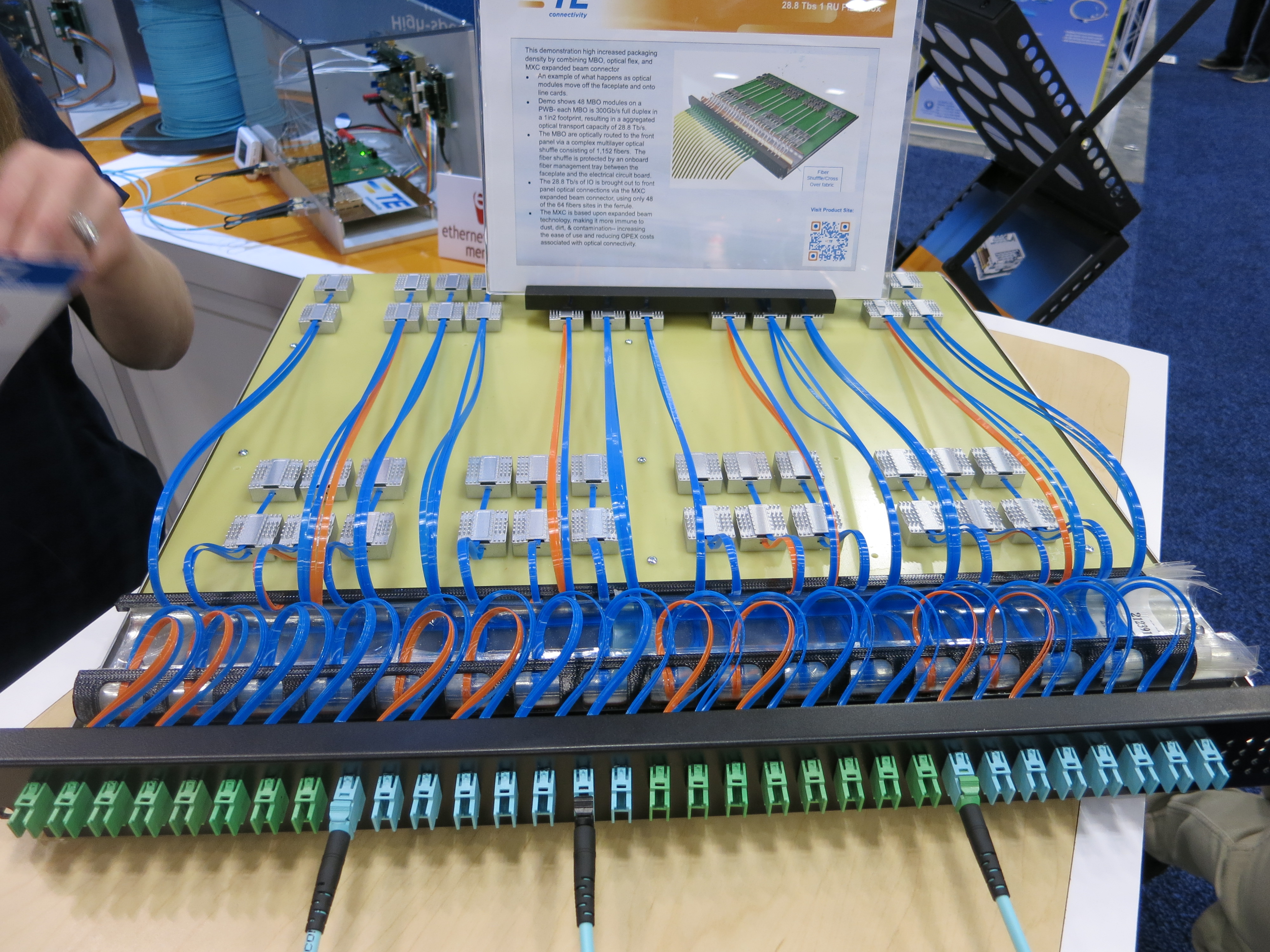 As Becky Anderson likes to sing, OFC is the most wonderful time of the year for us laser heads.  This year had some real buzz to it with all of these announcements and 12,700 people in attendance.  Fiber optics are hot again!