This 400GbE demonstration and its message is a public assertion of the Ethernet Alliance mission to foster confidence in IEEE 802 Ethernet technologies and products. With that said, we should also explore other aspects of this demonstration, because the overall message is that Ethernet at 10GbE, 25GbE, 50GbE, 100GbE, and 400GbE is here and ready to address multiple application spaces.  And as the Ethernet Alliance 2018 roadmap indicates Ethernet is going everywhere – there is no single path to take any more, as every application space is now on its own trajectory.

Take for instance 50GbE, which is being demonstrated for reaches up to 40km of single-mode fiber.

While not officially a standard yet, 50GbE will heavily leverage technology developed for 400GbE.  In the final balloting stages in the IEEE, it is anticipated that 50GbE will make its ratified standard debut later this year.  In addition, the IEEE 802.3 Beyond 10km Optical PHYs Study Group is in the development stages of a project that will include an expansion of 50GbE to 40km reaches.  One of the motivators for this effort is support of the mobile backhaul networks, particularly in China.  This use-case is a highlight of the geographical diversity that Ethernet addresses, as shown in Figure 1, China’s bandwidth demands are clearly growing at a faster pace than other regions of the world.  This chart highlights the growing bandwidth demands, fueled by consumer video, that the Chinese operators are seeking to address with a potential Ethernet based solution. 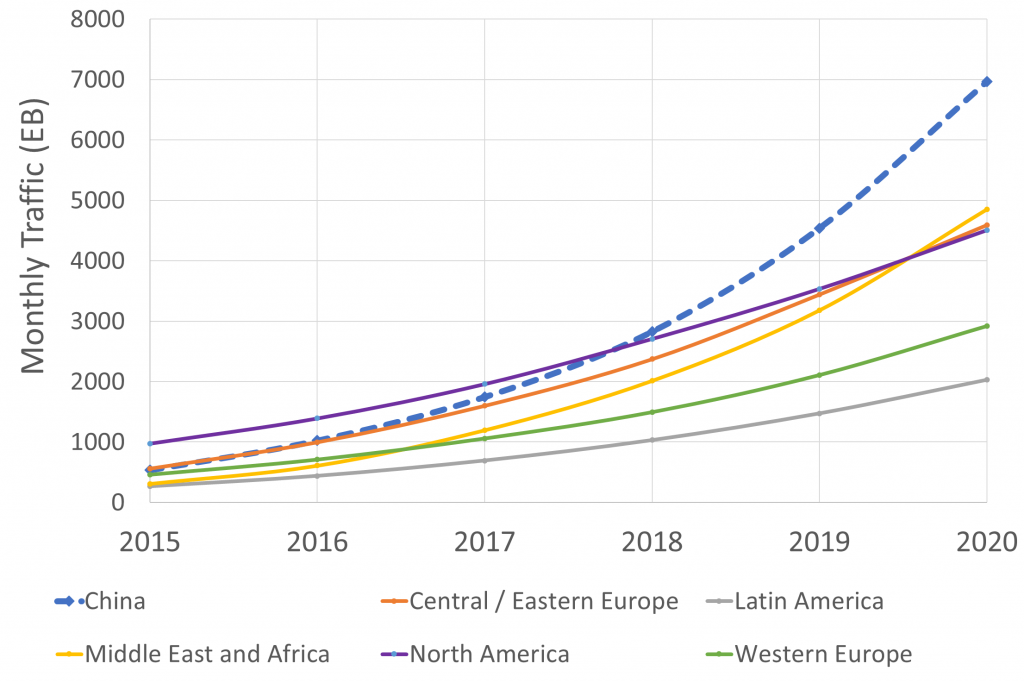 So while 400GbE is the poster child of OFC buzz worthiness, in truth Ethernet, and all of its incarnations is the real star of OFC!