On October 15th and 16th the Ethernet industry gathered at the Ethernet Alliance’s Technology Exploration Forum (TEF) 2013: The Future of Ethernet. I have always looked forward to these events as I see the participants who show up to be the Ethernet Alliance’s industry Technology Advisory Board. And with Bob Metcalfe, the Father of Ethernet, keynoting the event, as well as leading an innovation panel, we had quite the time this year. From an intriguing full two-day agenda (http://ethernetalliance.org/the-future-of-ethernet-agenda/) to a packed room of industry experts and participants, there were a myriad of topics with accompanying perspectives represented at this year’s TEF to explore.

From my own personal background, I am known for my work with driving higher Ethernet speed efforts. I tend to see things from these speed-tinted glasses, but Ethernet is more than just about speeds and feeds. As Bob Metcalfe put it – Ethernet is a brand of innovation! With everything moving so quickly, there is less time to get things right and all stakeholders, from the component vendor to the system provider to the end user, ultimately need to work together. Let’s use Metcalfe’s Law to describe these consensus-building activities, where the value of our consensus building grows as a function of the number of people that gets involved. As you involve more people in such an activity, the contributed perspectives will help all to see the entirety of the problem that is faced, rather than their own perspective.

The key to Ethernet’s success has been its ability to evolve to support the needs of industry. The TEF events provide the industry with the opportunity to voice their opinions and discuss the potential evolution of Ethernet. So what opinions were voiced this year?

The economic concern didn’t just apply to technology being deployed, as some were concerned that investments in new technology might be hindered due to the lack of research dollars.

He spoke volumes to me…Ethernet’s best days are ahead of it. 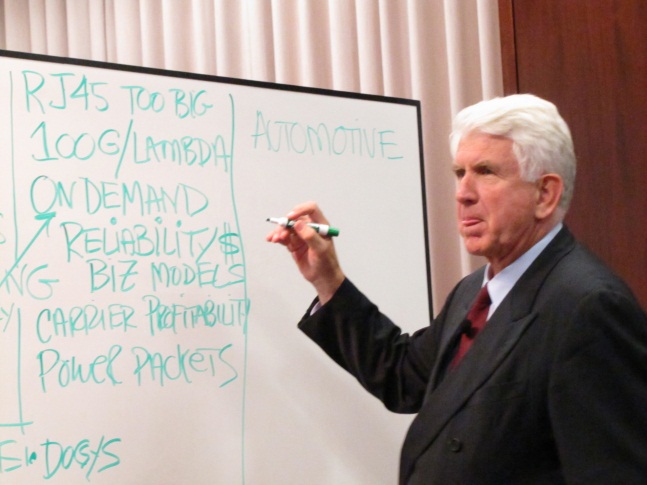