On the first day of the Ethernet Alliance’s TEF21: The Road Ahead, we heard from two industry analysts and a long-time member of the Ethernet industry who discussed the market needs driving the push to higher bandwidths. In Market Need – the Next Rate, moderator Peter Jones, Ethernet Alliance chair, along with panelists Sameh Boujelbene, Dell-Oro (Market Drivers for Next Generation Ethernet Speeds) David Ofelt (What Comes after 400GbE) and Vlad Kozlov (Diverging Needs of Enterprise and Cloud Customers) looked at the pace of speed migration by various market segments from enterprise to data center to cloud, and the challenges associated with getting to the next speed. Panelists considered the building blocks that are a necessary part of the upgrade cycle and what factors will drive markets to the next speed.

At the presentations’ conclusion, the audience engaged panelists with several questions about the pace and direction of technology development needed to address escalating speed and bandwidth requirements. Their insightful responses are captured below in part one of a two-part series. 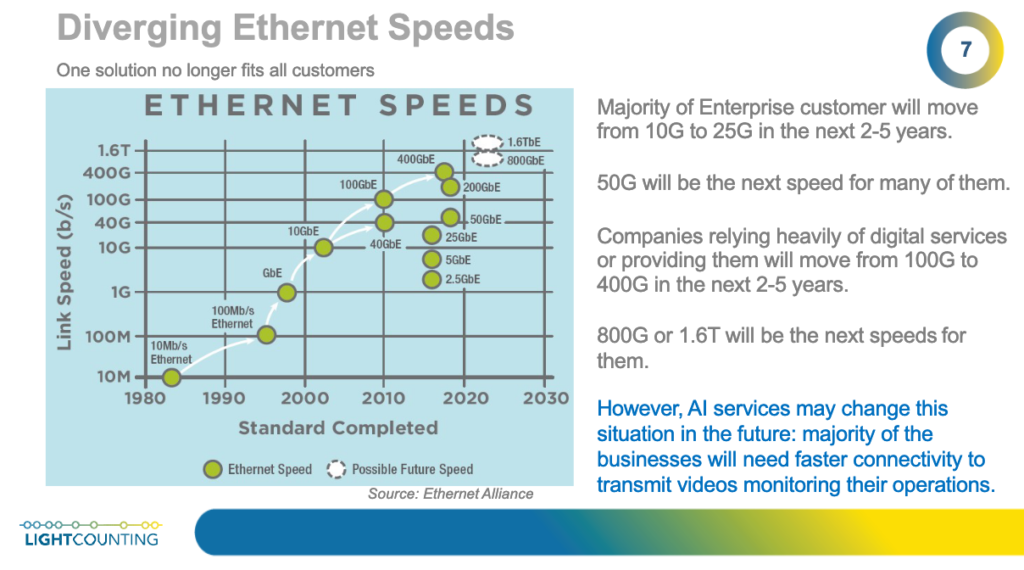 The Next Ethernet Rate and How to Get There

Vlad Kozlov: My suggestion is, don’t skip it, because there will be customers that are going to need 800G, they’re going to stay with 800G. I think going one step at a time is the right solution. It would be fantastic if we could get 1.6T in five years from now, but skipping the steps is not the right approach.

Peter Jones: This makes perfect sense to me. Speed used to increase by a factor of 10 and that started to split apart in 2010. Since then, we’ve realized that we need a whole lot of rates for different applications. Sameh, David, do you have any disagreement with that?

David Ofelt: I don’t disagree. There’s a practical matter of getting 200G class electrical out in a framework that (customers) would be happy with, but I think it is going to take quite a while. We are going to have 100G electrical in the market pretty soon. That takes time to mature, and that gives us an 800G module, which leads to a nice 800G Ethernet. We can get that out to the market pretty quickly, compared to 1.6T, which requires everything to change.

Sameh Boujebene: I think time to market is key, that’s number one. Keep in mind that in order for us to have 1.6T, we need 200G on the electrical side and the optical side. I think it will take the ecosystem some time to get there. Number two, there is a need for 800G in the market. If you extrapolate on some of the use-cases -because everything is definitely end-user-driven – using Facebook as an example, I think my chart stopped at 128 ports of 400G. The next implementation would be 128 ports of 800G, right? That’s with the 100T chip capacity. There is a need for 800G.

Peter Jones: Historically we’ve seen this one lane/four lane approach, you know, 10, 40, 25, 100, et cetera. Is this going to continue? Or are we really moving towards the one to eight from here on?

Sameh Boujebene: I think we all agree that the market need is really diverse. I don’t think that it will be just one, or four lanes of something. There will be 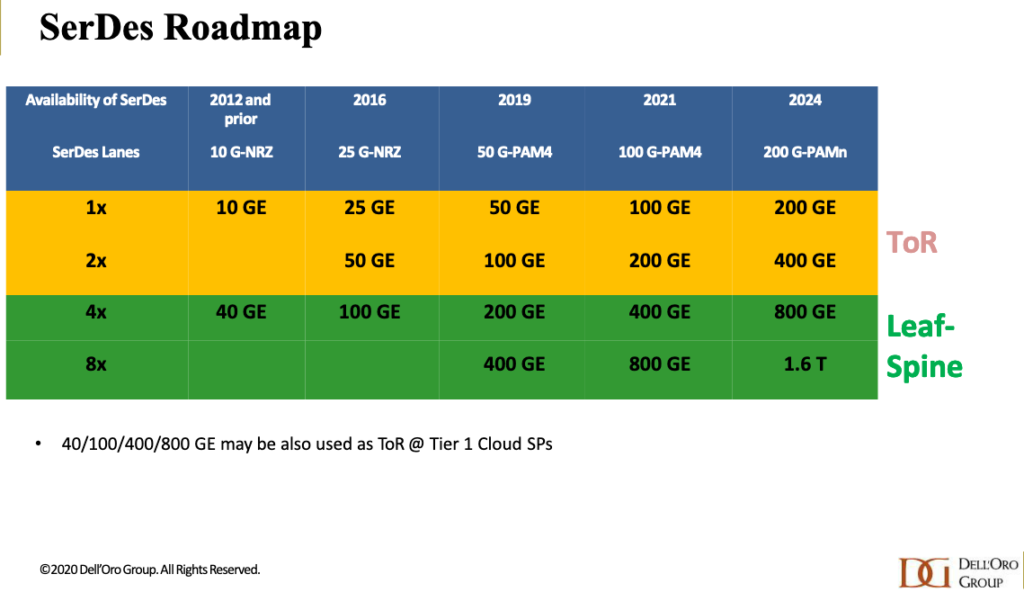 something that is based on eight lanes, or even two lanes. Again, as Vlad said, not everything is a home run. That’s another question, right? The higher speeds will probably still be based on four lanes of something. But the early speeds, or the early adoption curve, will probably be driven by speeds based on eight lanes of something. I don’t think there is one definitive answer here.

David Ofelt: Just one point, in on-wire technology eight wavelengths has proven to be a little more clunky and difficult to deal with. There tends to be a trend towards fewer on-the-wire lanes. Now, that’s different from the chip-to-module interface, where at least what the architectures have been doing since 100GE started, easily allowing them to change by power factors of two. You can go from eight to four to two to one into the module. It is just a practical thing of how to build a module. That part is independent.

Vlad Kozlov: I think it’s important to keep track of inflection points in the market. If you look at the transceiver market eight is already the maximum number of lanes you want to have, and the smaller the better. But if you look at co-packaged optics (CPO), Broadcom just announced the first implementations with 32 lanes per optical chiplet. They don’t disclose exactly how they achieve it but if I remember correctly, they reported 64 fibers per millimeter density. You know, the density could be incredible. So, things change. And it’s important to keep that in mind.